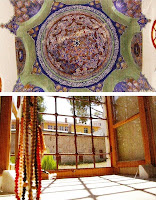 Firuzbey Mosque: This is the most famous mosque around Muğla. It was constructed by Hoca Firuz Bey, the Menteşe Govenor in Sultan Beyazrt, in 1394. The western side of the mosque consists of rooms that served as madrassas. Since the roof is coated with bullet, people name this construction as "the Mosque with Bullet".

Belen Mosque: This mosque takes place in the District of Hisarbaşı and near the Çöllüoğlu Caravanserai. It was restored by Mehmet Sait Ağa in 1750.