What is DASK - TCIP insurance in Turkey?

The History of TCIP - DASK

Due to geologic and topographic structure and climate attributes of Turkey, it is frequently confronted with natural disasters that lead to immense losses of life and property. Natural disasters that affect Turkey can be put in order according to their severity; Earthquakes, land slides, water floods, falling rocks, fires, avalanches, storms and under ground water movement. Within the past 60 years, when we take into consideration statistics of structural damage caused by natural disasters in Turkey, it is observed that 2/3 of the damages occurs due to earthquakes. As a result, in Turkey when we mention natural disasters, the first thing that comes to peoples mind are Earthquakes. When looking at the seismic zone map that is in effect at the present time, 96% of the territories of Turkey are inside seismic zones that possess various risk ratios, and that 98% of our inhabitants are located in these areas. These ratios reveal quite dramatically that Turkey is a high risk earthquake zone. 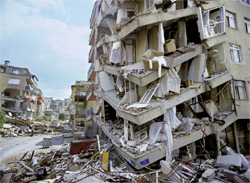 Not only do earthquakes effect the regions hit by disasters, but the country as a whole, as all residents living in the country are affected by the consequences. There are the material damages, the getting back to regular life within the seismic zone, alleviating the needs of those who require emergency assistance, together with the incurred expenditures which are an immense financial burden to the national economy and the state. On 17th of August 1999, the Marmara Earthquake can be seen as the most recent example of this and was the worst natural disaster in Turkey of this century, which was a hugely devastating  economically and socially.

Subsequent to the Marmara earthquake which caused the loss of thousands of lives and properties, a great number of precautions were taken in order to minimize the damages of Earthquakes by the public authority. One of the most significant precautions is the execution of the Turkish Compulsory Insurance Pool (TCIP). 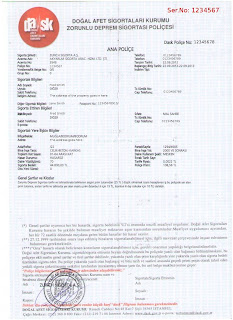 Within the Marmara Earthquake Emergency Reconstruction Project, the World Bank assisted Turkey in designing an insurance program to be able to manage it's own national catastrophic exposure. The project consisted of two main objectives; one was technical assistance to the General Directorate of Insurance in establishing TCIP and ensuring the sound management of the pool for the first five years of establishment. The second was to provide initial capital through a contingent loan facility. The project was the first World Bank project to have components of financial risk management, disaster mitigation and emergency preparedness.

Immediately after the devastating earthquake, on 27.08.1999, Law No.4452 "Measures to be taken Against Natural Disasters and Authorization in Regards to Arrangements in Overcoming Damages Caused by Natural Disasters Law" was enacted giving three months of provisional authority to the Council of Ministers to organise and establish the legal framework for natural disasters. With this power of authority Decree Law No.587 "Decree Law Relating to Compulsory Earthquake Insurance" entered into force, being published on 27.12.1999, giving birth to TCIP.

The tariffs and regulations were published on 8th of September 2000 and as of 27th of September 2000, TCIP began to offer cover after 9 months of formation  following the law by decree. The following year, on 27th of March 2001, earthquake insurance became compulsory for the dwellings of those subject to compulsory earthquake insurance as described in the law by decree. Currently 29 accredited insurance companies and their agents are providing Compulsory Earthquake Insurance in the name and on behalf of TCIP. This newly formed system produced a fantastic performance in a very short time and it was proposed as a model solution for many countries by international organizations.

For more information about TCIP DASK visit the government website http://www.tcip.gov.tr
Posted by Simon at 20:58