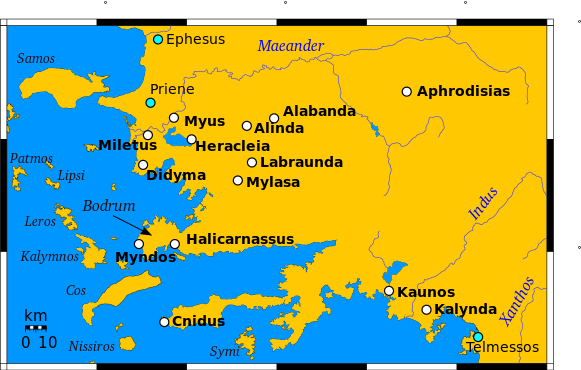 Milas (ancient Greek Mylasa Μύλασα) is an ancient city and the seat of the district of the same name in Muğla Province in southwestern Turkey. The city commands a region with an active economy, and the region is very rich in history and its remains, the whole territory of Milas district containing a remarkable twenty-seven archaeological sites of note. The city was the first capital of ancient Caria and of the Anatolian beylik of Menteşe in medieval times. There was a Jewish community.


The centre of Milas presents the overall characteristics of a well-grown city focused on agricultural and aquacultural processing, related industrial activities, services, transportation (particularly since the opening of Milas-Bodrum Airport), tourism and culture. The center is at a distance of about twenty km from the coast and is actually closer to the airport than Bodrum itself, with many late arrival passengers of the high season increasingly opting to stay in Milas rather than in Bodrum where accommodation is likely to be difficult to find.

Milas district covers a total area of 2167 km2 and this area follows a total coastline length of 150 km, both to the north-west in the Gulf of Güllük and to the south along the Gulf of Gökova, and to these should be added the shores of Lake Bafa in the north divided between the district area of Milas and that of Aydın district of Söke.

Along with the province seat of Muğla and the province's southernmost district of Fethiye, Milas is among the prominent settlements of south-west Turkey, these three centers being on a par with each other in terms of all-year population and the area their depending districts cover. Five townships which have their own municipalities and a total of 114 villages depend Milas, distinguishing the district with a record number of dependent settlements for a very wide surrounding region. Milas center is situated on a fertile plain at the foot of Mount Sodra on and around which sizable quarries of the white marble are found and have been used since very ancient times.

more on Wikipedia
Posted by Simon at 08:46