The wonders of Donkey's milk 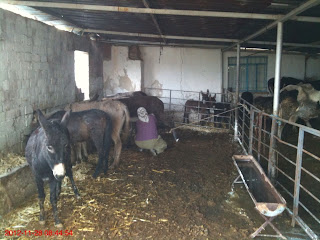 Donkey milk is considered to be the closest to woman’s milk. It is very nourishing because it contains more lactose and less fat than cow’s milk. It was used until the beginning of the twentieth century as a substitute to breast milk.
The 1928 testimony of Dr. Charles Porcher (1872-1933) of the Lyon
National Veterinary Institution showed that the practice was still used,
to a lesser extent, in the interwar years:

It seems that we are getting back to asses’ milk to
raise children in the earliest infancy, notably when the child is of
delicate health. Asses’ milk has not been quite totally abandoned, but
if 25 or 30 years ago, a few well looked-after asses were easily found
in the city to provide milk nourishing young babies, it is no longer the
case today.

More recently, studies have shown that that asses’ milk could serve
as an alternative to cow’s milk for children allergic to bovine
proteins. Asses’ milk was also formerly used in medicine. Its healing virtues have been known since Antiquity, when doctors would recommend it to cure diverse affections. Information taken from Wikipedia

More Donkey farms are appearing in Turkey, probably due to the financial benefits. Donkey milk is sold for 35 to 55 euros in European countries due to its rarity and limited supply. Not sure if that is per cup or litre though. Either way it is expensive due to it's limited supply.

Small farms can be found in Bodrum and Milas where the milk can be drunk fresh and ward straight after milking the donkey. Another benefit is that it does not need to be pasteurized or treated as it is bacteria free.

Here is an article in the Hurriyet Daily news about a donkey farm.